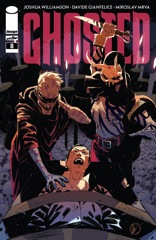 Gianfelice’s art stands out this issue. Maybe it’s because everything Williamson does–Jackson is being held hostage–needs to be a surprise. There’s the villains taunting him so their taunts need to be visually rendered, there’s the allies doing a surprise attack, the surprise needs to be rendered. Even though there aren’t any huge set piece fights (I think they average three or four panels), the art’s essential.

Also essential is giving Jackson someone to talk with. Williamson can run him through the Bond henchmen and Bond villain–a comparison the comic itself raises–but giving him a chance to connect with a “regular” character is necessary to jump start the arc. Ghosted has been doing fine, but once Williamson unveils the damsel in distress’s secret, it improves.

While the flashback stuff is calculatedly compelling, Williamson hasn’t introduced complicated intrigue in the arc until now. It seems worth the wait.