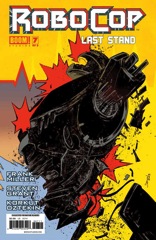 It’s an all art issue. It’s an all action issue too, but there’s not even the regular amount of witty banter for an action issue. So it’s just Öztekin doing a fight scene between Robocop and various cyborgs. All the cyborgs look alike. Robocop does have some special gear and there are a couple plot twists and sight gags… but it’s basically just this one fight scene.

I love Öztekin’s artwork but this issue doesn’t challenge him. He’s not doing anything crazy. Gone is the way he paced out intricate action sequences. It’s just Robocop punching one cyborg, then another one. Oh, they gang up on him and he’s got to persevere, but there’s no tension. That lack of tension is Grant’s fault.

Even though this issue has the big fight scene, it feels like a bridging one. What’s important isn’t what has happened here but what’s coming next. Unfortunate.