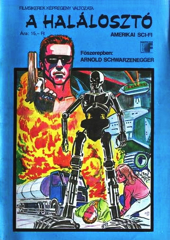 What a very strange adaptation of The Terminator. It was originally published as single panels, one a day (as a promotion in Hungary), which makes a lot of sense. The panels do look a little like trading card snapshots of the film.

Without all the text–or maybe with just less of it (adapter Attila Fazekas just took lengthy dialogue and squeezed it into half of his panels)–the comic would be better. It’s a curiosity, but it definitely makes one want to watch the film again. Fazekas does a fairly good job; he’s not doing anything sequential as much as the snapshots as I mentioned before.

He does rather well fitting a lot of information into one of these panels. For instance, when the Terminator is killing Linda Hamilton’s friend (or has just killed her), the boyfriend’s off in the background. Fazekas knows how to compress.