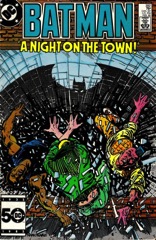 I’m not sure how I feel about Jan Duursema inking Mandrake. Somehow the vibrancy of the art is gone; the action scenes feel static. Maybe the best sequence is a car accident, just because of the motion has to be included.

That quibble aside, it’s a genial issue. Batman and Catwoman–she’s a vigilante now, much to Bullock’s chagrin–spend a night on the town. It’s supposed to be romantic, but they end up having to fight crime. Moench doesn’t get the tone deafness of it–they have a cute banter scene, are about to kiss, have to stop and go prevent an incredibly violent rape.

Moench’s trying though, he’s definitely trying. The issue is all one night, so there’s no opportunity to see what he’s doing with Bruce Wayne. Bruce seems downgraded, but who knows.

The comic’s bland and fine.