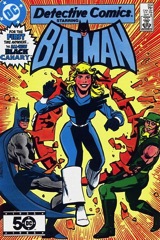 The feature story is actually rather confusing. Not throughout, when Batman, Robin and Harvey Bullock are trying to get on an ocean liner to save hostages, but when Moench gets to revealing why the hostage takers are in town. I had to read like maybe three times and I’m still not sure I’ve got it right.

But with the art–and the banter between Robin and Bullock–who cares. It’s a fine outing.

And then, in Green Arrow, Black Canary gets a new eighties costume and the Canary Cry. It’s not a great story, but the artwork’s excellent and it amuses well enough.