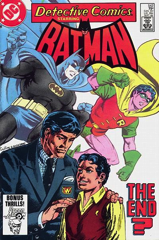 It says something when Moench’s got more character in two or three dialogue interchanges between Jason and Alfred’s daughter–they don’t like each other or something–than in a bunch of lengthy conversations between Batman and Robin. Family services takes Jason Todd away because Bruce Wayne neglected the legal process.

Yeah, right. Seems unlikely, especially when he tells the Wayne Foundation board they exist to do his bidding. It’s a megalomaniac scene and just shows how little Moench has to say about the character. The supporting cast? The villains? Moench does great. Batman? Not so much. Not at all.

If it weren’t for the moody artwork, there wouldn’t even be a point to having Batman and Robin show up in the comic. Everything else is better.

In the feature, anyway, because there’s nothing worse than the Green Arrow backup. Cavalieri introduces so many new character names, it story’s almost incomprehensible.