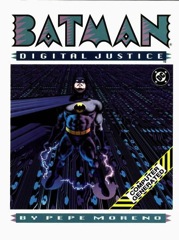 Digital Justice is an odd mix of Tron and Frank Miller’s Dark Knight. There’s a floating skateboard in it too, which must either be a really cool idea or Justice creator Pepe Moreno saw a Back to the Future II trailer.

What’s maybe strangest about the book’s failings is Moreno isn’t responsible for the biggest problem. Sure, he came up with the silly, derivative story, but he didn’t write the dialogue. The dialogue in this comic is just awful and Doug Murray gets a solo credit on it. I suppose keeping all the terminology straight–Moreno and Murray do create an extensive vocabulary–is sort of impressive.

Makes you miss the late eighties and early nineties, when computer viruses were just the coolest thing in the world. Or not.

Because other than the digital art angle, there’s nothing to do this comic. Some of the art’s not bad, as Moreno isn’t going for realism, he just going for art made on a computer. Somehow there’s enough time for Moreno to introduce a new Robin and a new Catwoman, but not enough time to make either of them decent characters. I guess DC didn’t edit him too much.

Digital Justice is definitely a curiosity, but doesn’t achieve anything more.