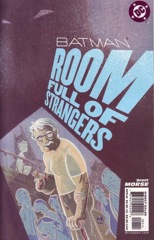 Room Full of Strangers is a depressingly little story about Jim Gordon going on vacation after retiring and finding himself in the middle of a film noir. Except it’s all very brightly colored and playful film noir, courtesy Scott Morse, who somehow makes the cartoonish atmosphere perfect.

It’s not just how he moves his characters around–each has a very distinct, caricature look in Morse’s style–rather, it’s how he colors the scenes. He’s able to set a mood with just a single color over his art; the night time scene is fantastic, but there’s also some beautiful stuff with Gordon walking around this coastal setting.

Strangers is a wonderful mainstream comic. Morse accomplishes quite a bit.