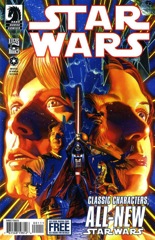 During the first scene, with Luke Skywalker whining, I thought Brian Wood had figured a good way to do Star Wars. It’s a concept book–the comic is just a sequel to the original movie and avoiding the things fans have seen or read since. In other words, it’s the original Marvel Star Wars comic.

Luke’s not the worst characterization though. Wood saves that honor for Princess Leia. It’s impossible to imagine Carrie Fisher saying any of the lines. Han Solo’s weak too, but nowhere near as bad as Leia.

The comic might at least move if it weren’t for Wood’s exposition rectangles. He explains not just character’s emotions and motivations, but recounts scenes he’s just shown.

It’s not a terrible comic, just a pointless one without any redeeming moments.