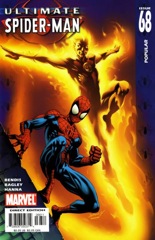 Johnny Storm goes to Midtown High. Bendis is apparently on the guest star bandwagon right now. At least Gwen gets a mention, with Mary telling Peter to snap out of the funk but he really can’t because all of Ultimate is in one.

Bendis is coasting along here, not really establishing anything–he previously mentioned May and Peter might be moving, but there’s nothing at home here. He opens with the Fantastic Four, no less. Peter and the gang just show up later.

There’s a lot of mention of them being sophomores, more than I can remember happening before, which reads like Bendis is trying to reestablish the ground situation. Kong’s a bit of a bully now, Flash hasn’t changed since Gwen’s death.

The issue’s fun–Bendis knows how to write fun–but the lack of focus hurts it a little. Bendis needs to build again, instead he’s treading water.