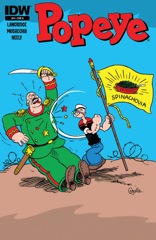 The Popeye feature suffers a little from lack of intelligent characters. For a second, I thought Castor Oyl would prove smart; he does not. Wimpy does show intelligence… and never gets recognized for it. But Langridge never loses track of him, which is sort of a reward. Langridge loses track of everyone at some point in the story.

It’s a very busy tale of a small (microscopic) kingdom Popeye and friends have to save. There’s lots of dialogue; Langridge wraps the exposition into the jokes beautifully. It’s well-written, it’s just a war story mixed with a detective story mixed with Popeye. It’s amazing Langridge is able to keep track of it at all.

The Sappo backup is a beautifully simple day at the beach. The jokes are universally strong, Langridge paces them all carefully, Neely’s artwork is lovely.

It’s a good comic, the backup’s just stronger than the feature.