Boom!, Comics, Planet of the Apes by Andrew Wickliffe7 December 2012 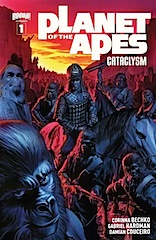 Corrina Bechko and Gabriel Hardman come up with something unexpected here in Cataclysm. Historically, Planet of the Apes comics have one big problem–there’s not enough material from the movies to translate into a serialized narrative. Bechko and Hardman have a neat solution–a disaster. Not just any disaster, but one tying into the movies’ canon.

Sort of. One could be picky about it, but I was so impressed with where they go, I can’t imagine one would want to be.

Cataclysm is the best kind of licensed property comic. It relies on the source material, relies on the license holder’s comics, and mixes the two with some creativity to encourage the reader’s imagination. Licensed properties have to be unexpected to succeed, otherwise they’re just fanfic. Bechko and Hardman succeed. Cataclysm engages.

Very nice art from Damian Couceiro too. He does well both with the talking heads and the action.