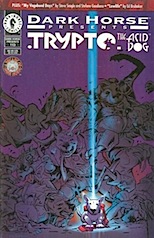 I was trying to remember where I knew Leialoha from… he inks now. He pencils and inks Trypto, which has a superhero dog splash page and then a rather traditional story. It’s about a stolen dog being forced to dogfight. Mumy and Ferrer’s script is fine and Leialoha has some imaginative composition, but his art doesn’t carry it.

Seagle and Gaudiano’s My Vagabond Days is set in the late sixties; it concerns a disrespectful young kid learning those soldiers in Vietnam are over there dying for his freedom. Seagle’s writing is, politics aside, lame. Worse, Gaudiano doesn’t work very hard on the art—it’s almost like a sketch album.

Thankfully, Brubaker’s Lowlife appears. Is Chris the protagonist the whole time (the Brubaker stand-in)? Anyway, this story chronicles the first day of a breakup. Inventive, human dialogue and some great composition. I’ve read these stories before, and they’re still great.