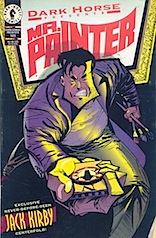 I want to take back all the nice things I said about Shaw’s Alan Bland. This installment is annoying and idiotic–Shaw has so many sight gags, he eventually runs out of space on the page. And the script thinks old hippies (who look more beatnik) are hilarious. It’s atrocious.

Pope’s got second slot, which is nice… makes the issue more digestible. One-Trick continues, with Pope complicating the heist aspect of the narrative. It’s such a delicate mix, overall, between genre and tone. Lots of concentration on race and culture here.

It has to be bad (besides the Pope) because Niles’s mystery is actually the second best story in the comic. There’s less bad dialogue, only because there’s less dialogue, and the mystery’s mildly interesting.