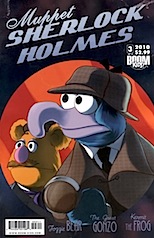 I can’t decide if this issue is the strongest or if it’s just the one where Gonzo solves the case….

The opening titles establish the cast–Kermit and Piggy are now permanent additions (Piggy’s Irene Adler now impersonating Mrs. Hudson, which is a great way to keep her around)–and it certainly seems like Muppet Sherlock Holmes could have some legs. A sequel series or two would probably be just as good as this series, since they’re adapting from the Conan Doyle’s.

Mebberson’s art for this series is so sharp and so thoughtful. The third act, with the heist sequence, looks fantastic.