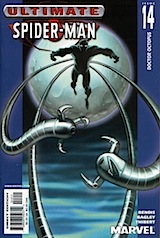 There’s a scene missing from this issue, the one where Mary Jane and Liz react to Gwen Stacy. Bendis gets in the boys’ reaction, but not the girls. Maybe, as I did, they were admiring her manly physique. Whatever Bagley was trying, he fails on her brief appearance. She looks like an Aryan She-Hulk.

Actually, it’s a fine enough introduction, but Bendis does a lot of other good stuff this issue so Gwen gets lost. Doctor Octopus has his first appearance post-accident here and, wow, do Bendis and Bagley do a good job with it. They make him tragic without having to make him sympathetic–SHIELD has let him suffer as a test subject. Just great stuff.

There’s also a cliffhanger with Kong figuring out Peter is Spider-Man.

Speaking of Spider-Man, Peter doesn’t appear in costume this issue. I hadn’t even realized until typing this response.