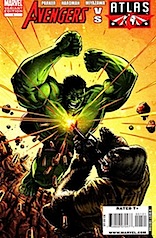 Why isn’t Jeff Parker writing the Avengers? I’d read an Avengers book by Parker in a heartbeat, even with the strange team line-up they’ve got going. His characterizations here–especially of Wolverine, Spider-Man and Luke Cage (the Captain America is a little nondescript)–are fantastic. It fully accounts for the absurdity of the line-up, but doesn’t let it show stop.

As for the Atlas scenes–it’s mostly Atlas, mostly Atlas in fight scenes–Parker does his standard great job. He’s changed things up a bit, since Atlas stories usually have some underlying arc, but here it’s just the regular one–they’re on a mission of break up the evil Atlas remnants.

The issue’s mostly action, but Parker and Hardman get in four or five set pieces, so it doesn’t just fly by during the fighting. It also doesn’t hurt Parker comes up with some great visual concepts.