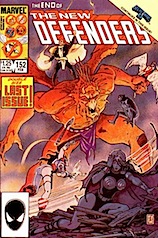 Um. I never read The New Defenders so I don’t really know what the deal is with this issue, given it’s the final issue and it resolves a bunch of New Defenders stuff–is Valkyrie still dead and was Manslaughter supposed to be gay? I also didn’t know there were so many X-Men in the New Defenders. Where are all the regular Defenders? You’d think they’d make an appearance.

It’s a double-sized issue, which works, from a plotting standpoint. The issue never feels rushed. The Secret Wars II crossover is idiotic.

The real surprise is the Don Perlin art. I didn’t realize he worked into the eighties. I’d sit there and read it and be shocked by the awful artwork, then remember it was Perlin. The art’s awful, something the cover tries to hide.

It’s okay, I guess, for eighties Marvel, but I’m not the one to ask.