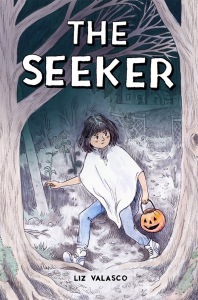 The Seeker is somewhere between somewhat disturbing and very disturbing. Creator Liz Valasco gets somewhere quite profound by the end, then dials it down a notch for the last story beat. It’s too bad, but sort of not surprising. It’s hard to say where Valasco could take for the finish to satisfy. Almost anything would be too heavy in a very different way than the rest of the comic has been heavy.

The comic takes place on Halloween in a “normal” town. It looks like Peanuts, actually; visually, Seeker reminds of Edward Gorey and Peanuts. Valasco’s art is often… pleasant, only for the story developments to make those visuals terrifying. The first part of the comic—the seventy-ish page book is split into five chapters—has “The Seeker” as the protagonist. She’s a tween, too old for Halloween but still loves the holiday. Her dad has abandoned her and her mom; her mom isn’t around in the comic. Everyone ditches the kid. So she’s trying some magic to make a friend of her own. It works, rather matter-of-factly, and by the end of the first part, the kid’s got herself a talking jack-o’-lantern, brought to life with a cat skull, magic, and cockroaches.

But the kid isn’t the protagonist for the rest of the comic. In the other four parts, the protagonist is Rob. Rob’s a teenager, also apparently in a house without a dad, and he’s going out on Halloween to drink beers and maybe get to flirt with a girl he likes. His buddy is there, along with a girl for the buddy. Pretty soon they run into the kid and the teenage girls take her under their wing, which is cool until the kid gives the jack-o’-lantern the last ingredient it needs for whatever its got planned and it reanimates a skeleton. The teenagers can’t handle the skeleton. Especially not when it seems to have evil intentions.

The best stuff in The Seeker is the teenage girls. Valasco gets a whole different kind of energy when writing their scenes and characters. The buddy’s girlfriend is about six times more interesting than Rob and only because she tries to burb louder. Rob’s just a bit of a teenage jerk—he tries to be better, which is cool and full of potential, but it goes nowhere. The girl Rob likes is a great character. The Seeker kid is a great character, she just doesn’t get anything to do because she’s more functional to the plot than anything else. There are a couple times Valasco almost takes the comic somewhere special in regards to the kid, then doesn’t. In theory, the ending ought to be all about her too, but Valasco veers way away from that conclusion. Unfortunately.

The comic’s got a lot of uncanny vibes, but ends up just being a tad disquieting. Who knows what ending would work better, but it’s definitely not the one the comic’s got.

Valasco has a pleasant style, albeit with thinner lines than seem right for the comic—it’s too Gorey, not Schulz-y enough. Though Valasco does fabulous with the scary forest. More detail, especially on the faces, wouldn’t hurt. The Seeker’s in that uncomfortable spot where it’s not detailed enough to be one thing but too detailed to be another. But even with the less than steady art, Valasco’s got some great narrative instincts. And once the teenage girls show up, the dialogue problems go away; the conversations between Rob and his mom are real iffy. Rob’s just a dull protagonist.

There’s a lot of strong stuff in The Seeker. It’s not altogether successful, but it’s pretty darn good.