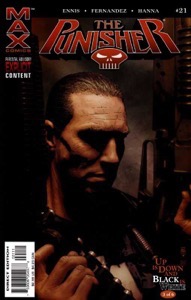 Every once and a while I wonder if I’m too liberal in my use of the term “bridging issue” to quickly describe how a writer uses an issue to set up the second half or next part of an arc. Then I’ll read a comic like Punisher MAX #21 and it’s exactly what I’m talking about. There have been a couple other bridging issues in Punisher MAX, but this one is the first where it feels like Ennis is writing for the trade. Makes sense as it’s the fourth arc and they’d have seen floppies versus trade sales.

Stuff sort of happens this issue, but all of it is anticipatory. Ex-CIA agent O’Brien breaks out of the pokey and heads to former colleague and fellow ex-CIA agent Roth’s apartment for help. Frank goes on a killing spree to force the NYPD to resolve outstanding issues with Nicky Cavella’s “prank” at the Castle family grave site. Meanwhile, Rawlins—who it turns out was married to O’Brien at one point because it’s still a Marvel comic and Marvel comics love nothing more than backstory coincidences—also happens to know Cavella and goes to meet with him. The issue ends with Frank killing a bunch of people and musing about a recurring dream, the one where he finally loses it and turns the guns on the civilians.

It’s a shame Ennis uses that Frank narration just to make the ending… more effective than it would be if it were just Frank killing a bunch of disposable, generic bad guys. The dream’s disturbing to be sure, but it’s also the Punisher reflecting on his chosen vocation and how he understands it. He’s not seeking vengeance, he’s not seeking redemption, so why does he do what he does. Ennis has been, slowly, starting to unpack that question since the start of the series. Just when he’s got the opportunity to do it here, he ends the issue. Because Frank’s killing spree is different than his usual thing—he’s slaughtering the bad guys in full view of civilians, hitting a night club, for example. He’s bringing his reality to a lot of people who don’t usually see it.

And then there’s the art.

It’s by no means a bad issue but it sure reads better in the trade versus the floppy. Especially for three bucks.