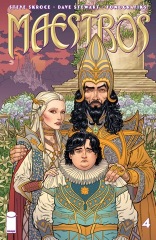 I’m still excited about Maestros but I’m no longer worried about it. Skroce has got a handle on the book. He knows what he’s doing; four issues in, he’s established his characters. The split between present day and flashback–something he introduced and then temporarily abandoned–serves him well this issue. He’s got the mom back. The mom’s a cool character. She’s even cooler after this issue.

And the Maestro himself has an all right story to himself this issue. In the flashback, he’s background, but in the present, Skroce actually takes the time to explore the Maestro’s personal philosophy. We’ve already seen it in action–his attempts at benevolent ruling–but here Skroce shows it from the Maestro’s perspective.

Skroce knows where he can excel–visually–and he stays focused on those narrative possibilities. Maestros is conservative in its scope, but outstanding in that scope.