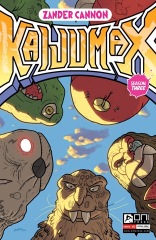 If it were any other comic right now, an issue like this one would seem like a major course correction. Cannon talks through most of Kaijumax’s outstanding issues–with talking heads scenes–but really well. He manages to make the prison doctor in love with Zonn work. He’s never been able to do that one. But now there’s crisis and it’s working. Maybe because it’s crisis the reader cares about.

And there’s resolution to the giant goat arc. It’s got some surprises in it, little ones, but also just great comic book pacing.

Some of the problem with Season Three has been Cannon’s fixation on the prison as a whole and that whole is where the problems come in. Is Kaijumax on Antarctica? Where else is big enough. It’s got to be crazy big.

Anyway. It’s a very solid issue. It’s just not enough to convince me Cannon’s going to have a good way to wrap it up next issue.