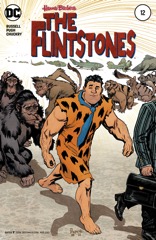 Russell puts The Flintstones to bed with a summary of the human race (from the Great Gazoo). Turns out prehistoric Bedrock is a lot more like the 21st century than one might think. There’s a lot of story threads–Fred needs to win an important bowling game, his bowling ball is preparing to rebel against human oppression, Pebbles thinks maybe mystery god Gerald is bunk and science is real–plus some nods back to previous issues. Wilma doesn’t get anything, Betty gets less. It’s sort of manipulative, Russell knows all the right buttons to push, including the nostalgia ones (including mocking nostalgia ones), and Pugh’s art is wonderful as always. The Flintstones has been an interesting, not entirely successful, but often inordinately ambitious series. It’s been a fine time; a yabba dabba doo time, as it were.