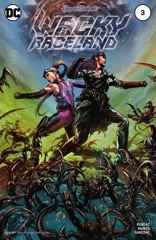 Once again, I’m left a little perplexed by Wacky Raceland. It’s still not wacky, unless they’re trying to rebrand “wacky” as something out of a Mad Max movie, which would make sense. Wacky Raceland feels like corporate synergy on overdrive but it doesn’t matter because writer Pontac’s ideas are engaging enough. Oh, and because Leonardo Manco’s art is awesome. There’s not a lot of original design, just good execution of the standards for post-apocalyptic societies with old cars. Lots of examples for that setting.

And Pontac does try to build the characters. He has a pattern now–a few characters get a story, the other ones fight well-drawn but a little too obscure monsters, then things wrap-up. Every issue is kind of a done-in-one.

This issue’s character is some girl who ran away from a bad situation and things went even worse because of the apocalypse. Manco does that story as a Greek fable. It’s not successful. It’s well-intentioned, but it’s not successful.

But it barely slows the comic down just because of the momentum Pontac and Manco work up in the rest of it. Wacky Raceland’s a cool comic.