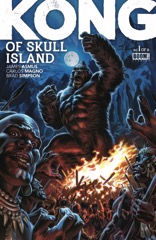 Anyway–I wasn’t excited about Kong of Skull Island. Artist Carlos Magno is sort of Boom!’s go-to licensed event guy. He’s incredibly competent, incredibly thoughtful, but lacking in anything particularly dynamic. Kong doesn’t give him anything particularly dynamic. It does play to his strengths, however. He gets to do lots of detailed scenery, lots of carefully posed characters in panels so as not to have to carry the comic with their dialogue, lots of giant monsters, lots of awesome quarter page spreads.

Oh, right. The “awesome” factor to Kong. It’s about a bunch of giant apes–who fight, of course–their intellectually and socially (if not technologically) advanced Polynesian keepers and an island with a bunch of dinosaurs. There’s a cool mythology to it, which works in Kong because writer James Asmus isn’t keeping DeVito’s frame. God forbid he does a sequel series, but who knows, I think they might do an all right job of it.