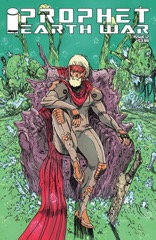 What is this comic? It’s definitely a Prophet comic. It reminds of when Graham and Roy would follow up some great issue with an inexplicable, but also great, fill-in. Only this issue of Earth War isn’t great. It’s all around pedestrian, which is a painful thing to say but… less painful than the comic (at least in the context of Prophet overall).

The story is simple. There’s one of the bad guy John Prophets who decides to kill all the Earth Mothers. So he does. There’s a little more to it, but not much. The issue is a series of fight scenes with minimal exposition and even less character. Nothing interesting about the setting. The backup tries to compensate for the feature’s lack of exploration, but it’s too little, too late.

Eventually, the one really bad ass Earth Mother comes to Earth to fight the bad John Prophet, who was multiple arms and looks more like a Rob Liefeld creation than anything in the comic, which is a Liefeld creation, has to date. I’m using “Liefeld creation” as a pejorative (hopefully the tone made it clear).

Now for the even more unpleasant part. Ron Ackins’s art. It appears painted (but I don’t think it is actually painted) and it’s a bad fit for Prophet. Earth War sort of feels like Prophet Lite and the lack of detail in the art enables that negative sentiment. There’s a dullness when Prophet needs to be sharp.

The aforementioned backup, with art from Aaron Conley and a script by Shannon Lentz, is at least an attempt at a Prophet tale. It’s detailed, it’s got intricate exposition, it’s gross. But it’s also not enough.