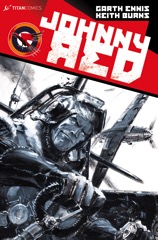 I wonder how long Johnny Red is going to go. Unlike writer Garth Ennis’s usual war comics, he gives this one a modern-day frame and an American protagonist (in the modern day). I think Ennis used to give his historical series some kind of frame, but I haven’t seen one lately (or ever in War Stories), so it’s weird.

But Johnny Red isn’t just another war comic. It’s Ennis doing a relaunch, something he doesn’t do as often as one might think (especially lower profile).

On the art, Ennis has Keith Burns. It’s a fine pairing. Burns handles the larger than life aspects of the plot, but he also has extremely detailed, extremely realistic air battles. There’s an energy to Burns’s art, an enthusiasm to his lines. He’s excited about the contrast–the present-day settings, the flashbacks to the forties. Ennis puts those connections entirely on Burns this issue, comparing modern Russia to early Soviet.

There’s a lot of dialogue before the flashback too. Ennis has a good time with it. He’s practically breezy with Johnny Red; it’s serious, but somewhat removed thanks to the framing.