Comics, Fade Out, Image, The Fade Out by Andrew Wickliffe22 October 2015 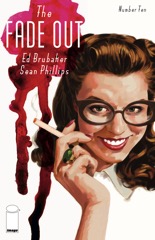 Brubaker’s winding up. This issue of The Fade Out is the part of the detective novel where the detective–in this case Charlie, who’s not particularly good at it–is collecting all the final details to have his breakthrough. In fact, the narration hints Charlie’s confident in his conclusions, which means Brubaker’s got next issue to stir it up more and then the last issue to let it all settle. Not a bad structure, but it does mean there isn’t much to this issue.

There’s exposition and some revelation, but there’s no character development. Brubaker sets the issue during the wrap party for the movie, which should be a big thing. It’s not. It’s a logical narrative progression–Charlie using the party for cover on his investigating–as the story wraps up.

The last few issues of The Fade Out have been breathtaking. This issue’s good, narratively important, but it’s not breathtaking. It’s a necessity and it coasts on existing momentum. Fingers crossed Brubaker is able to stir up some speed in the next issue.

Phillips’s art, of course, is breathtaking. One never has to worry about him.