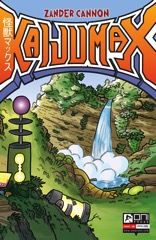 Cannon goes the extra step this issue, time and again. By extra step, I mean he distances himself from the gimmick–Monster Island as a prison–and it becomes a prison drama. With all the hard things a prison drama entails.

Sure, there’s the mystery of the kid from Godzilla’s Revenge trying to coax Minya into assassinating Godzilla, but it’s a heavy sequence (full of emotional abuse). It would be the lightest of the four subplots. And there’s a half subplot about one of the Ultraman guards finding he enjoys having the power over the prisoners.

Cannon’s style, ready for Saturday morning cartoons, along with the wide open vistas of the island (logically, isn’t the island a little small for all the monsters), go against the grit of the story. It just makes the comic all the more affecting.