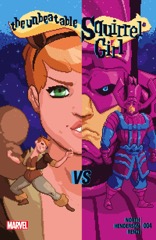 Writer North understands the lunacy of Squirrel Girl fighting Galactus but he’s also writing a comic called The Unbeatable Squirrel Girl so he’s got to come up with something good. And he does. He doesn’t take the comic too seriously, which helps because Squirrel Girl doesn’t need to be realistic, it needs to obey internal logic and amuse.

North turns Galactus into a great banter partner for Squirrel Girl–and Tippy Toe–while keeping a decent amount of action in the comic. Henderson’s style doesn’t seem a fit for comic book space opera but she really gets it. The Galactus encounter on the moon is full of memorable shots and set pieces.

There’s even tension–which should be difficult since North has a bunch of framing devices but it all works out rather nicely. If Squirrel Girl can take on Galactus and win, it can do anything.