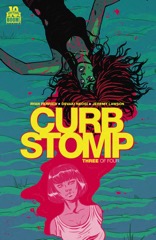 The first issue of Curb Stomp had a lot of promise, the second issue implied maybe it didn’t… the third shows Ferrier and Neogi are going to do even better than that initial promise. It’s an outstanding comic book with a masterful control of the plotting. And some of Neogi’s best art–there are a lot of rituals in this issue (as the gangs negotiate) and Neogi has a visual theme for each different kind of ritual. It’s awesome.

Ferrier’s script is almost in real time but lots of things happen. It’s not a talking heads comic, it’s an action comic, just one with occasional talking. Each conversation is a confrontation, which works entirely differently. It’s not about exposition or explanation, it’s about action.

Not to say there isn’t general action–whether it’s suspense or just all out fight scenes–but Ferrier and Neogi do a great job maintaining tone.