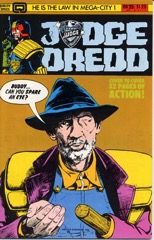 This issue has two stories–a long feature (or a combination of at least three 2000 A.D. chapters) and a backup. Wagner and Grant write both, Ron Smith does the art on both. Smith’s an interesting artist for Dredd because he doesn’t take any time with the judges. Both stories require judges to be distinguished, Smith doesn’t care. But he does care about the rest of the story.

The rest of the story–for the feature–has to do with a town of refugees and what happens when Dredd brings the law. Lots of big action and small future post-apocalyptic stuff. Wagner and Grant do a whole exile thing with the criminals; it’s fairly awesome Dredd. Once one gets over Smith’s inability to draw Dredd.

The backup has judge impersonators (while the feature just has lots of judges). The scheming criminals distinguish it (in their silliness) most of all.