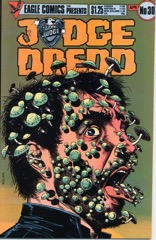 It’s a tough issue. Not in a bad way, but in a post-Apocalypse War, the future is a tough place, tough issue. Wagner, Grant and Ezquerra do both stories. The writing is better than the art, but Ezquerra does pretty well with it. There’s humor and humanity. Can’t ask for much more.

The first story has Dredd dealing with a robot city’s tyrannical ruler. Wagner and Grant manage to make it silly and still rather affecting; maybe because Dredd seems to be in actual danger after a point. And the handling of the War’s aftermath is fantastic.

The second story–the much longer one–has a fungus outbreak putting the struggling Mega-City One in danger and Dredd has to race to stop it. It’s a rather good story, with Wagner and Grant roaming with the focus for a while.

The toughness never feels overdone or tongue in cheek.