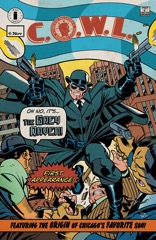 It’s a gimmick issue, with artist Elsa Charretier filling in. The comic is supposed to be a licensed biography of the Grey Raven from 1962. The best part of the gimmick–conceptually, not in execution–is the sixties advertisements for other modern Image Comics. The ads don’t come off, but the idea is cute.

It’s a reductive gimmick and doesn’t offer much. It’s still a competent enough outing and Charretier fits the gimmick perfectly. She doesn’t have much detail or compositional ingenuity.