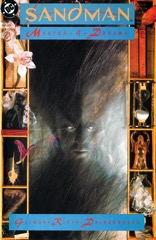 Neil Gaiman starts Sandman with the world changing. Except it’s in flashback, so it’s entirely possible the reader has been living in this changed world without realizing it. Except it’s sort of in DC continuity–the Golden Age Sandman shows up–so the reader isn’t really in that world anyway. Gaiman plays with the ideas a little, but doesn’t go particularly far with them.

Sam Keith and Mike Dringenberg’s art is fantastic for these parts of the issue. Creepy, gory, but never overboard with it. They find the exact balance–and retain some physical humor in the art. It’s great.

Then the titular character comes in and, all of a sudden, Keith can’t draw figures in the right proportion anymore. And Gaiman’s narrating from Dream’s perspective (he doesn’t get named yet but still), but only from the second half of the issue or later.