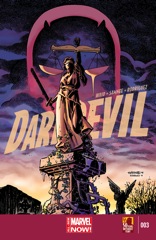 It’s so bland. Why am I reading it? It’s so bland. Even the ending is bland. It’s sort of an all-ages Daredevil comic written for adults. And Samnee is the perfect artist for that tone. But it doesn’t have to be so bland–Waid doesn’t have anything going under the surface here. Foggy popping in from witness protection is just Foggy being so darned lovable again.

Even the Owl–after all this foreshadowing about his appearance, there’s zero pay-off. Maybe Waid is pacing it out for next issue, like he transforms or something, but the damage is already done. There’s already been a boring showdown with the Owl. Who cares if he Larry Talbots?

Once again, the only thing special about Daredevil is the Samnee art. It’s beautiful stuff–I wish there had been more exterior scenes–but it’s just not enough to keep the comic going.