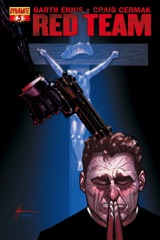 Ennis pulls Red Team up a notch with this issue. He’s got a lot on the killer cops, but they’re after a pedophile priest–and Ennis manages to restrain himself when they’re all talking about the Catholic Church too. It’s impressive.

But that sequence is actually awkward. It goes on too long, since the protagonist is doing the actual killing. So there’s got to be something special about it because this guy’s better rendered than his partners. Until the end, when the guy is talking to his partner–the single lady detective–at the bar and he’s whining about his life and so on. There’s nothing about the main plot; these two cops killing criminals in their off-time doesn’t figure in, it’s just a good scene.

And it’s the best scene in the series so far, because if Ennis is developing the main plot with it, he’s not showing his cards.