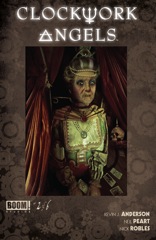 The problem’s the protagonist. If there was an era where a writer could get away with a generic white kid who’s just too much of a dreamer for his small hometown, Anderson is writing this comic about two eras removed from that one. If there ever was such an era.

This issue features the lead coming across a circus and a girl at said circus. Both will apparently be more important as things move along. Robles renders both precisely and beautifully, with the trapeze walking girl flying at one point. Looks magical, except it’s missing soul.

The comic’s about the protagonist’s wonderment and Anderson’s script is shockingly absent any of it.