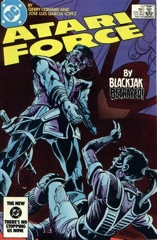 There’s very little personality to this issue. About the most of it comes from Babe–the rock creature–who apologizes at one point. It shows something going on besides the main plots, which are three.

First, there’s the deception on the team. It’s all really predictable and Conway doesn’t spend any time trying to make it palatable because it’s not. It’s too obvious and Conway can’t focus on it without making the characters seem too dumb.

Second, there’s surfer dude in captivity and the people around him. Again, not very engaging stuff because it’s a bunch of supporting cast members talking about a main cast member and the main cast member not doing anything.

Finally, there’s the bad guy. The Atari in Atari Force really comes through a few times because a lot of his dialogue sounds like terrible video game boss dialogue.