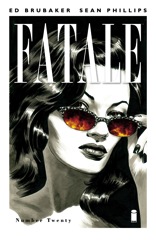 Well, okay, yeah… Fatale is definitely in its last lap. Brubaker doesn’t hide it at all. He does, however, rush things. I thought it was going to be an awesome issue of Jo flashing back to her very interesting past.

Instead, she becomes John McClane and has to save Nicolas. And that wraps up real quick. Not so much action-packed as Cthulhu-packed. I’m also not sure if the Donnie Darko reference was supposed to seem original or not.

But it’s hard to get excited about the finish because halfway through this issue, it’s clear Fatale isn’t coming to a nature end. Why do a bunch of character work on utterly disposable characters? It feels like the series got canceled on Brubaker and Phillips so they have to rush an ending. Only no, they apparently just ran out of interest.

Or Brubaker always had a weak ending planned out.