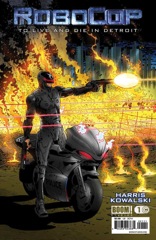 Again, not having seen the new Robocop movie, it’s hard to say who’s responsible for the nonsense of To Live and Die in Detroit. It could be writer Joe Harris. He certainly does write some terrible exposition about the Motor City and juxtaposes it against the lame action and activities of Robocop. Robocop, it turns out, is an asshat by the way. But did the editors make him an asshat or did the liaison at the license holder?

The art isn’t too bad. Piotr Kowalski does all right, actually. The sleek image of Robocop is boring, but the rest of the action’s decent. Shame about all Harris’s exposition. It’s nauseatingly obvious and incredibly lame. Unless some Detroit politician wants to give out the comic at a campaign rally.

But not with the resolution. The resolution is pure crap. Whoever came up with it should be ashamed of him or herself.