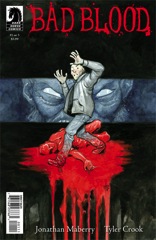 And here we have the opposite of the “pilot” issue. Bad Blood reminds of a nineties Vertigo series, where the publisher knew they had a reader base to try out a series and the reader wouldn’t give up because what were they going to do… read Spider-Man?

Writer Jonathan Maberry has a hook–a vampire bites the protagonist, who has cancer, and is out to ruin the protagonist’s life for having tainted blood. Yeah, the vampire’s thought process isn’t clear. Tyler Crook draws the vampire practically aquatic, gills and all. Very cool.

But Blood makes a big point out of being post-Twilight. The main character is familiar with that franchise–which makes him rather unlikable, actually–and just being terminally ill isn’t enough to make the guy worth reading about.

While it’s not a slam dunk concept, Maberry should’ve been able to get better mileage out of it.