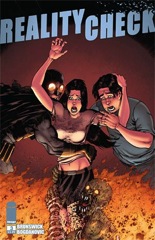 Reality Check is no longer funny. Brunswick is instead going for depressing. Only Bogdanovic doesn’t change his style at all, so the comic keeps looking like it could be funny–except maybe the green zombies–but it’s never funny again. It just gets more and more depressing.

And where’s the superhero from another dimension? He’s out on a date with the lead’s ex-girlfriend who he pushed away while going through a bad spot. Brunswick can’t make it believable the lead would have a girlfriend, not even back when he was less lonely.

There’s some banter between the lead and the superhero. Not particularly good, but Brunswick at least tries. Shame he doesn’t with the rest.