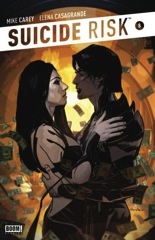 The first half of the issue is a lot better than the second. The second is why you don’t try to do an action scene as talking heads.

Carey opens with a lot of status updates. Leo’s kids, the United Nations, Leo and the supervillain lady having their morning after scene; Carey is catching up with a lot and juggling a lot and it works out.

But then there’s the scene with Leo and his new supervillain friends by the pool. There are also bombers about to nuke them or whatever and so Leo has to coordinate the team. It’s rather boring stuff, Leo on the ground, instructing people, quick panels showing the people carrying out instructions. The twist at the end is inexplicable and contrived.

It’s a strange issue. The first half shows Carey’s giving Risk legs, but the second makes it seem like he doesn’t know it’s going.