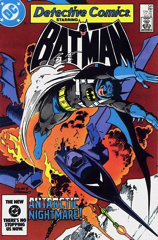 It’s a strange issue with Batman chasing the Penguin down to Antarctica to stop him from selling military secrets to the Russians. Moench throws in a couple twists, both of them vaguely amusing, but they come after his two instances of Batman overcoming impossible odds to succeed. They aren’t as amusing after Moench’s sapped all the suspense from the comic.

There’s a little with the subplots–family services is after Jason, Vicki Vale has an unwanted suitor–but I don’t think Bruce Wayne even makes an appearance this issue. I should have been keeping track of how often Moench gave him a scene.

The art’s decent. The Antarctic setting isn’t much, however; it’s not Colan’s fault, Moench just doesn’t have much good action for it.