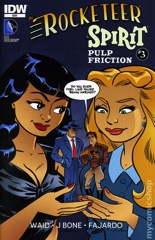 So J. Bone takes over the art. Maybe the intention was always a different artist on each issue, but it doesn’t play particularly well. Bone does very nice homage to Eisner’s character design without being too literal.

The story’s a little weak though… definitely a little weak. Waid definitely likes the Spirit and his supporting cast, but he casts Cliff as a buffoon. Betty’s a strumpet and Cliff’s a buffoon. Until the big action sequence–the two heroes’ different fist fights juxtaposed against each other–the Rocketeer doesn’t show up. Waid’s just got Cliff running around like an ass.

It’s awkward and unpleasant. The crossover is ill-advised–the characters’ don’t sync–but Waid could have come up with something better than Cliff being a boob.

The issue reads fast and Bone has some decent moments. Otherwise, it’s getting even worse than I had expected. Waid’s dropping the ball here.