Comics, Planet of the Apes by Andrew Wickliffe31 July 2013 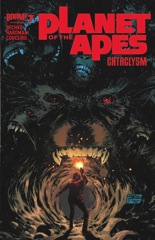 It’s funny how the Zaius subplot is actually where Bechko and Hardman have the most problems, even though it’s mostly a talking heads subplot. They’re keeping the Zaius subplot… well, it’s kind of the soil. It feeds into the other two plots and presumably could make major changes for them when they all collide. But it’s separate; the Zira subplot is separate too, but it won’t affect anything.

And the writers just can’t make it interesting. Zaius is impotent and too proud to listen to his wife, who actually knows what she’s talking about. One has to wonder who made that decision, Bechko or Hardman.

The Zira subplot this issue features a community meeting, not particularly interesting, but there are some really nice character moments. Cataclysm works because of these details from the writers.

The Cornelius subplot is action-packed and exciting. Great visuals from Couicero and Taibo help lots.