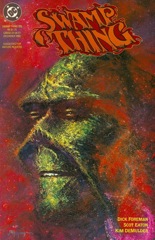 Dick Foreman coming in to do a guest writing spot gives Swamp Thing the break it needs. Even Eaton does a little better, since he’s not drawing people as much as grandiose cosmic events. Though he does take the chance to mess up Linda Holland.

Alec stalks a cartoonist he used to read–or Alec Holland used to read–and gets him stoned in hopes of inspiring him. That Swamp Thing would take the time to do such a thing is out of character for what Collins is doing, but who cares. A book needs something different occasionally and Foreman provides it.

The only time he loses track is when he has Alec explain the cartoonist’s place in the universe. It’s a real “show, don’t tell” moment; Foreman botches it. Can’t rightly blame Eaton.

Still, the rest is good–and the finish is great. It’s a rather successful fill-in.