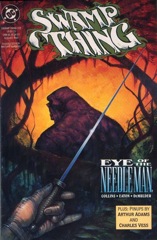 Collins doesn’t improve here. Eaton might a little, even though his pencils become incredibly static. He finally puts noses on the cast, which outweighs his other inabilities at a talking heads issue.

But Collins. She splits the Sunderland threat apart–one from the maniacally evil Sunderland daughter herself and another, tangentially related one from the gubernatorial candidate Alec embarrassed–but both threats are idiotic. Even if Alec can’t sense when people are plotting against him–all he does this issue is bond a little with Lady Jane–they still don’t need to use goofy plans.

Swamp Thing hasn’t felt so contrived in a long time. Collins is mostly just using keywords and catchphrases. I hope so she recovers soon, because when she turns pacifist hippie Chester into Rocky Balboa, the issue just collapses. It becomes a spoof of itself.

Even cliffhanger’s absent any tension. Collins is spreading everything too thin.