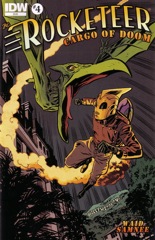 I went into this issue hopeful, I really did. I thought maybe Waid could do something besides Cliff flying around L.A. and killing a bunch of terrified animals.

He does do something else. It’s just not very good. Apparently Betty has been suspecting the sidekicks of being enemy spies–Sally and the black guy. It’s a little too subtle a suspicion because I didn’t get it until the wrap up of that subplot. I thought Betty was just being a shallow bitch.

After four issues, she’s clearly one of the big problems with the franchise. She’s utterly unlikable at length and Cliff’s continued interest in her just makes him seem more shallow too.

IDW should’ve just released a single, wordless issue of Samnee’s Rocketeer versus dinosaurs art. There are some beautiful panels, page after page, in this issue.